This year our Queen Beatrix will visit two cities in the province Zeeland.
Zeeland is a province in the south/west of Holland.
The two cities she and her family will vist are Wemeldinge and Middelburg.
Middelburg is the Capitol city of Zeeland.

As usual the Mayor will welcome her, and lead her along various groups of performers with traditional trades, dance, games, etc etc.
Many of the royal family join these activities.

As you know last year there whas an attack on the royal/family when they made a tour in an open bus in Apeldoorn. 8 people (spectators) died, and we all thought that this is the end of a tradition.

But our Queen Beatrix didn´t want it to end, and that´s why we will celebrate it again.
Ofcourse there will be extra security.

The night before Queen Beatrix and the royal family where in Apeldoorn and showed their respect at a memorial event at the place where it all happend last year.

Anyway, it is the wish of our queen to go on with our Queensday tradition and she and her family wants to be in the middle of it. 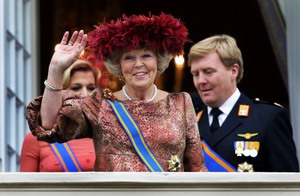 One thought on “30 April. Queensday in Holland”