Saterday 19e June, The day that Holland have to play their second game, against Japan in Durban Stadion.

So at 14.30 it the roads were empty, and we all watched the game. We had high expectations, but the Japanees had other ideas, and didn’t want to loose this game.
So Holland had problems to score with 10 Japanees defending their goal.

At half-time it was 0-0, but finally in the second half Wesley Sneijder made a fantastic goal: 1-0! 🙂

In the same poule as Holland and Japan, Danmark and Kameroen also played their second game. 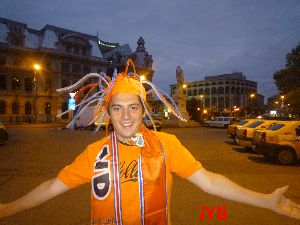 The game started at 21.30 in Loftus Stadion, Pretoria. That was a very nice game to watch
and Danmark was lucky to win with 2-1. Anyway that means that Holland is already sure of the 1/8 finale. Even if they loose the game of next thursday against Kameroen.

In poule D, Ghana played against Australia, at 17.00 in Rustenburg.
Australia made the first goal and played very well. But Ghana got a present from the referee by a penalty, so another draw, 1-1.

All games are very important cz. Slowakia, Italy, New-Zeeland and Paraguay all have just one point, anyway it’s difficult to make a prodiction.
Brazil wait a different game against Ivory-Coast, but i think that they will win.