Thursday 17e and Friday 18e there were some very important and (on paper) very interesting games on the programm.
So, let’s start with thursday:

At 14.30 Argentina-South-Korea , Soccercity Stadion in Johannesburg.
As expected Argentina was much to strong for South-Korea and thus they won with 4-1.

At 17.00 Greece -Nigeria, Freestate Stadion in Bloemfontein.
And this was the first surprise, cz. Greece beat Nigeria with 2-1.

At 21.30 France – Mexico , Peter Mokaba Stadion in Polokwane.
Again a surprise, noone could think that Mexico won, but that’s what they did. 2-0 So it look like France can pack their bags next week.

Friday 18e:
At 14.30 Germany – Servia , N.Mandela bay Stadion in Port Elisabeth.
After the first game of Germany against Australia (they won with 4-0) we had high expectations, but it was obvious that Servia wasn’t willing to co-operate. And from the first minute it was clear that Germany had
troubles. At the end of the first half Servia made a goal, and after the German player Klose got a red-card it was clear that they couldn’t win.
So the biggest surprise Germany-Servia 0-1.

At 17.00 Slovania – USA , Ellispark Stadion in Johannesburg.
It was a nice and exciting match to look at. I think that USA must be glad that the game ended in a draw 2-2. 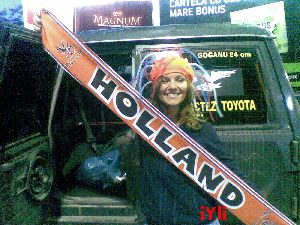 England played realy bad and in my opinion they must be glad that the match ended as they begon 0-0.

So the 3e and last game in the divers poules will be very important for may teams.
Anyway, Saterday 19e is The Day, Holland will play their second game against Japan.
And Holland is Orange all over. We all have Orange-feefer.

Anyway, will tell you all the ins and outs about the Dutch team later.
So, follow this blog !