Saterday: i woke up early (as usual) and went to the sanitairy building to take a shower and to shave. Organized my stuf in the caravan and made a quick caffé and a sandwich with old-cheese.
Than i went for a walk to the little store in the village to buy fresh bread, so they have bread when the others wake up.

Later in the morning we all went to Zwartsluis by bike to buy fish for bbq that night.
We bought scrimps and trout. We also bought vegetables to make salad and some fresh food.

When we came back we all were tired and…..thirsty, so we took our lazy chairs, wine and water and put ourselfs in the sun, again we were very lucky with the great weather (25).

Around 18.00 we start to prepare for the bbq.
I started with making salad and to prepare the trout.
Cleaned the trout and filled it with butter and herbs, than i packed the trout in aluminium and……………..ready for bbq.

Cz. it was not alowed to have open-fire on the campsite we use a gass bbq.
My friend started to bake the scrimps and i opened a bottle Pinot-griss.
We eat the scrimps with fresh bread and salad.

Between the scrimps and the trout another friend made us a “spoon” (champagne with sorbetice) to cool the stommage.
The trout was very yammy, just like the scrimps.

After that we had fresh fruit as dessert and later a strong black caffé.
Hahahahaha, so you can understand we made plans for a long trip by bike for the other day.

Ahhh. i remember that much later i went to the campsite-bar with one of my friends for a good talk and to drink the traditional Schipper-Bitter.
I quess after that i went to bed, cz. that’s where i woke up the other morning (a little later than usual) ! 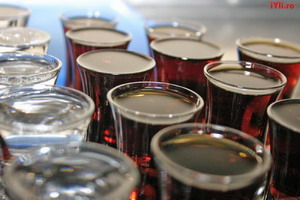